Our election process creates a need for candidates to spend lots of cash.

This money is used on staff, consultants, fundraising and election advertising.

This distorts our political system in several ways:

We have further complicated this process by

Citizens United was one prominent Supreme Court case that weakened these laws.

The current laws allow for immense amounts of money in our elections and also enables people or corporations to mask who they donate to. This lack of transparency makes it harder to know who is supporting each candidate. 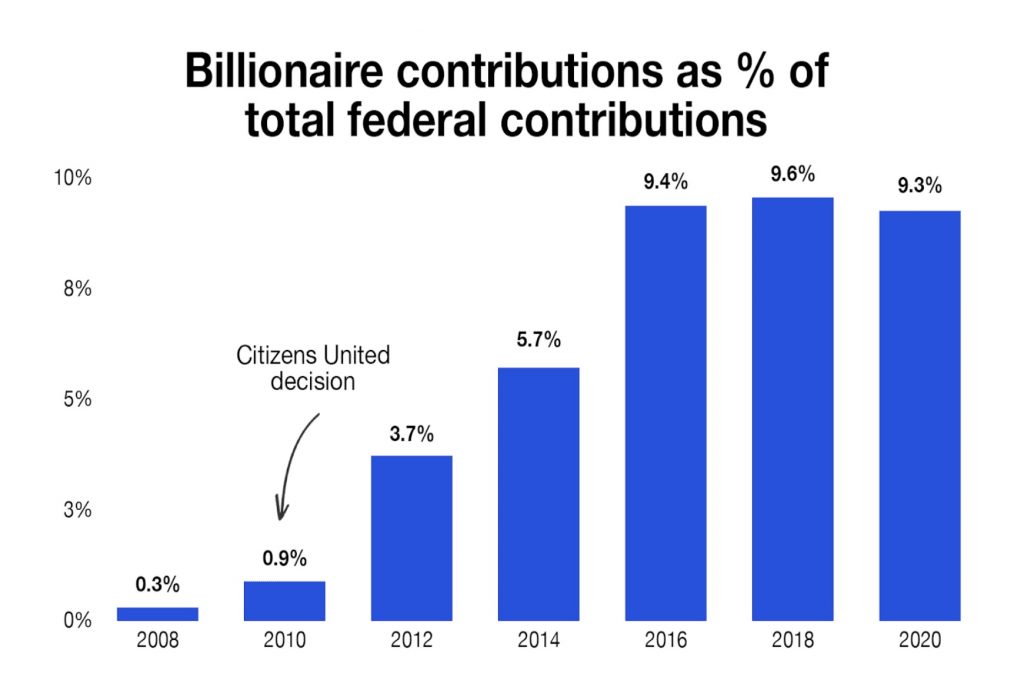 Jane Mayer wrote extensively about this in her book, Dark Money. She expertly exposes the  power network and influence of the conservative mega donors. The first 30 pages alone are eye opening as she reveals forces behind the scenes in politics.

At the center of this network are The Koch Brothers, who fund a maze of different organizations that all support their agenda. They employ over 1,600 people focused on shaping American politics. This is 3 times larger than the second largest political action committee. They have funded and groomed conservative politicians like Mike Pence and Mike Pompeo. They focus extensively on down ballot races at the state level (Secretary of State, Attorney General, etc.) where other organizations have not. This has a multiplier effect. First, there is less competition for these races, so they can win more easily. Then, once in office, they can help shape state or local laws. 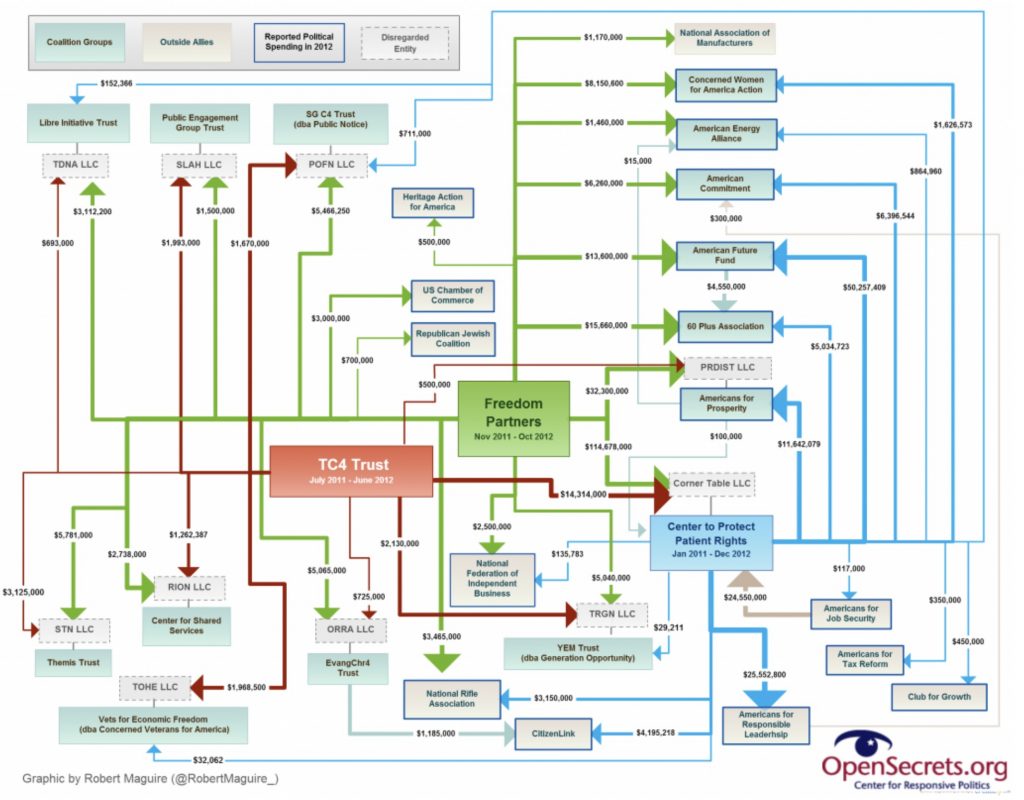 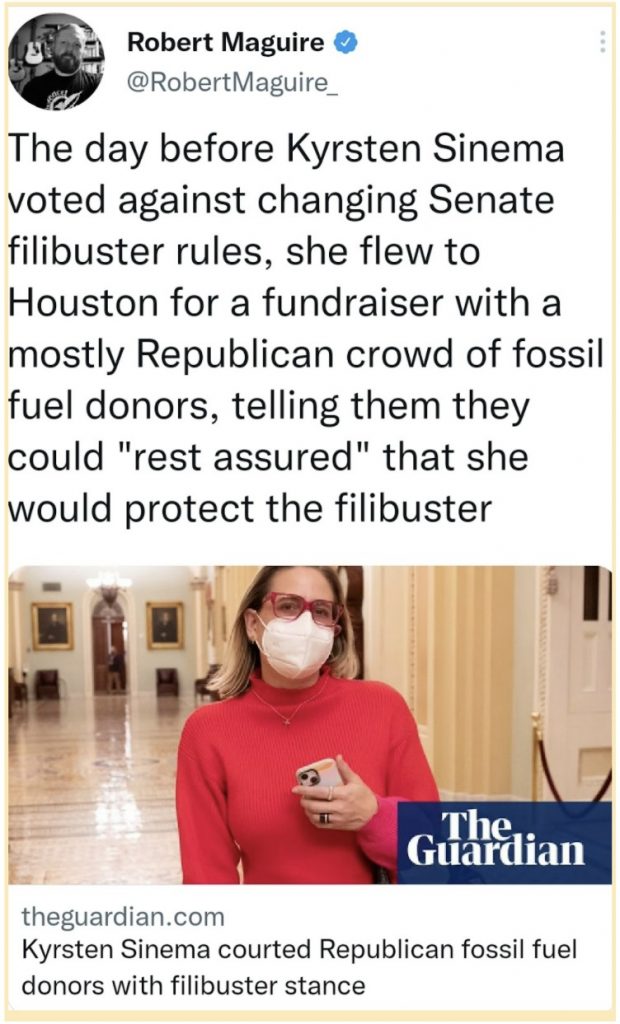 In 2021 and 2022, we saw in vivid detail how money in politics affects our political decisions. Important climate, social spending and election reform laws were all derailed by two democratic senators. And the charges of impropriety made no difference to their influence. Among the many other charges, this video went viral suggesting that Exxon lobbyists were very well connected to both of them. See this Twitter thread as well.

As a start, we can support some legislators’ proposals to clean up money in politics. In 2022, Senator Jon Ossof proposed legislation that would prohibit Congress members and their spouses from traded stocks. This bill is already gaining much support.   Will it actually pass?

Senator Sheldon Whitehouse is a fierce opponent of the Citizens United ruling. He has written a book called Captured, which is about how money is used in politics. He has proposed the DISCLOSE Act to restore political transparency.

We can also support organizations that expose which major companies support extremist candidates. We can then demand better from these companies and choose which companies to buy from, boycotting the companies that are using our spending with them supporting candidates we oppose. 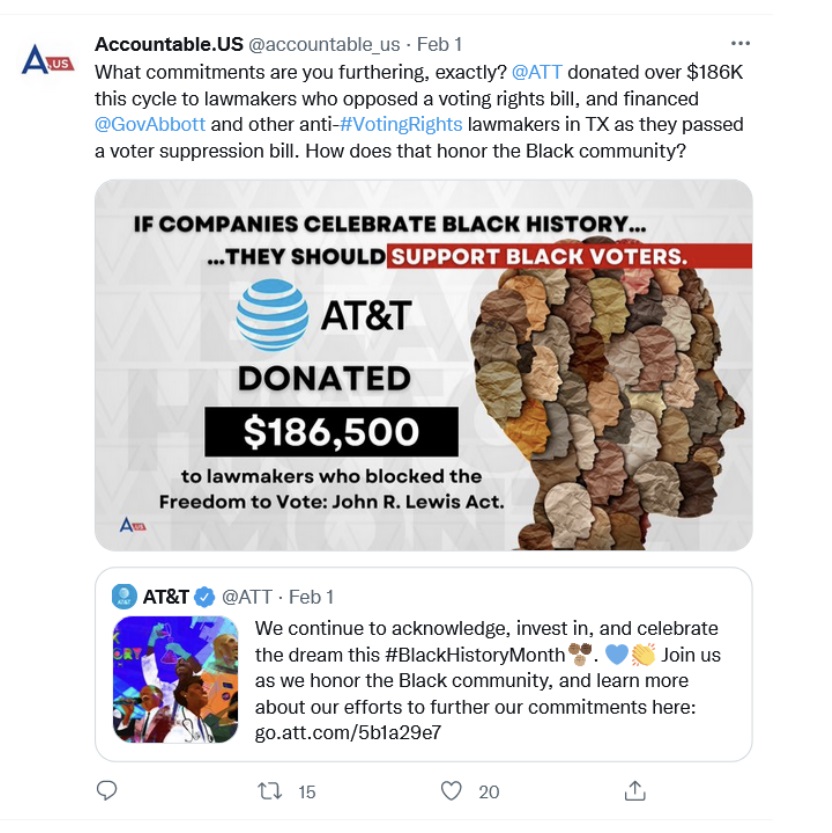 And perhaps most importantly, we can get closer to the root of the problem. Why have we created a system where politicians are required to raise funds? Experiments have been done with public funding of elections. Seattle tried a system where each citizen was mailed a voucher which represented some funding. The citizens gave the vouchers to the candidates they wanted to see supported and the candidates turned in the vouchers to the city to receive campaign funding.

This is also another reason to look at Sortition, which are lottery based elections, to eliminate professional politicians and have citizens serve instead. David Van Reybrouk’s book on sortition explains how elections first started, the problems produced by our current election system and why he believes sortition is a better alternative.

Are there other viable methods to remove money from elections? Please share some success stories with us.