Whether it’s heat to cook food, electricity to refrigerate that food, fuel for transportation or outlets to power your phone and computer, energy is a basic necessity for wellbeing. Unfortunately, when our energy needs are met with fossil fuels, it undermines the wellbeing of people and the planet. The negative impact of our dependence on fossil fuels has been widely acknowledged for a long time now.

In the excellent All We Can Save, which features essays and poems by female leaders, Eunice Newton Foote is named as the first person to demonstrate how carbon could overheat the planet in 1856. Warming was generally acknowledged in the 1970s. Here are news reports from the 1980s.

Walter Cronkite reporting on a Senate hearing on Climate Change in 1980 .

Carl Sagan testifying before then Senator Al Gore on Climate Change in 1985. 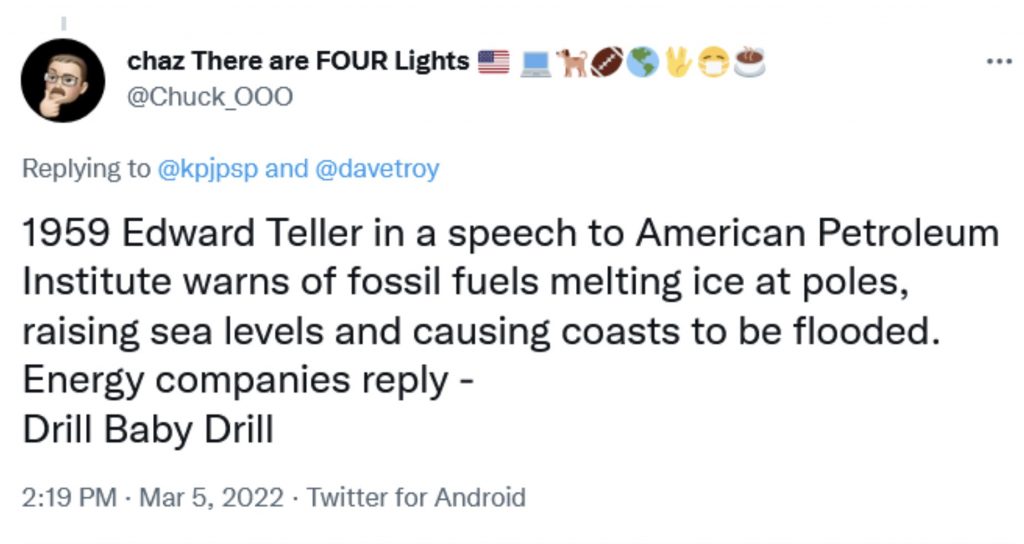 We know that fossil fuel companies have funded climate denial and misinformation. They still seem to have a stranglehold on the Republican party and two key senators holding back big climate bills.

REVEALED: How Exxon held back climate action for decades, and is still doing it today. We went undercover with Exxon’s lobbyists to expose the truth. Watch and share. pic.twitter.com/yICeai1Sop

Now that most of us know that Climate Change is a real problem, oil companies still don’t want to give up their money-making machines, so their tactics have changed. Lobbying is still a big part of their strategy, with the addtions of switching to confusing terms like Net Zero or claiming that only they can lead us to renewables. Here is a delightful comedy video about it (warning: don’t watch if cursing bothers you).

This confusion leads to government gridlock and splinters Americans, rather than unify us towards solutions. On this site, we cover some of the major efforts to reduce fossil fuels so that you can become educated and help make change happen now. The more people that we can get involved will greatly improve our chances to break the inertia and elect representatives who understand the challenges we face.

Major banks and investment funds (like Vanguard and Blackrock) are major enablers of rainforest destruction and oil extraction. One tactic you can take is to switch from a national bank to a more local or public bank. We can also put pressure on companies and banks to remove unethical companies from their portfolio.

Of course, you also need to be careful of double talk. One example is the ESG movement in finance; ESG stands for Ethical and Sustainable Governance. If you listen to the language used to describe ESG funds or ESG reporting, you might think this is the solution we have been waiting for. Yet, so far, most of the funds claiming to be ESG are still heavy in fossil fuels. 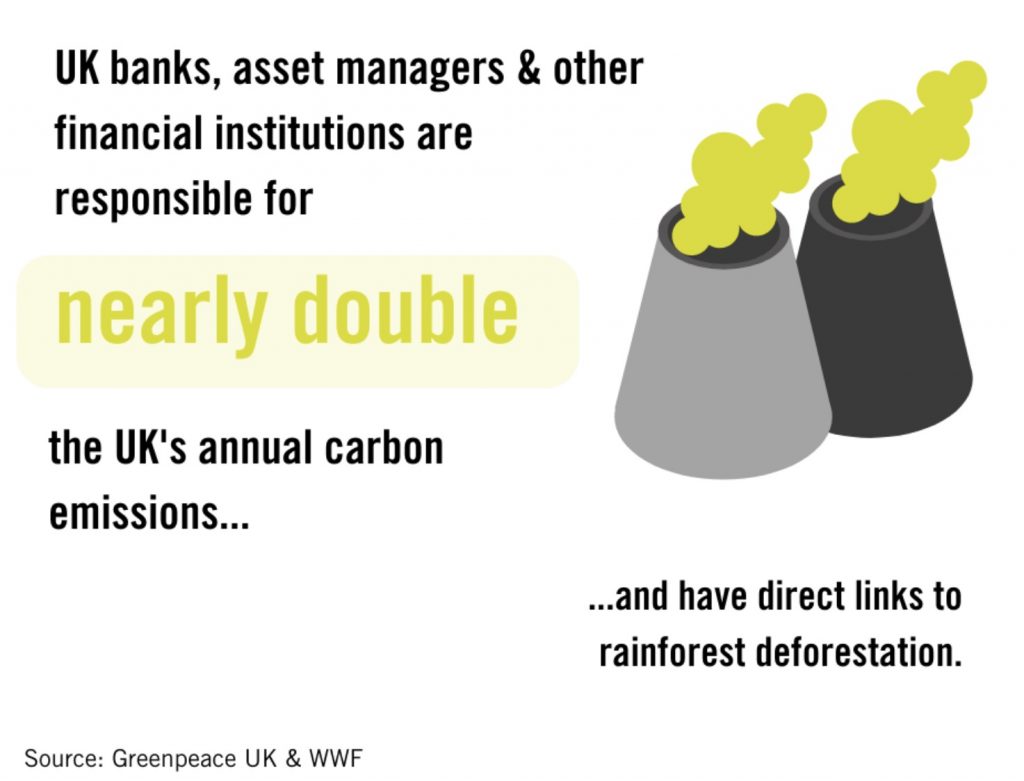 Did you know that the US Government subsidizes the fossil fuel industry? The End Oil and Gas Tax Subsidies Act was introduced by four members of Congress including Katie Porter and Sean Casten in 2021. Will it even come up for vote in 2022, much less get passed by a congress that seems to favor inaction on warming? 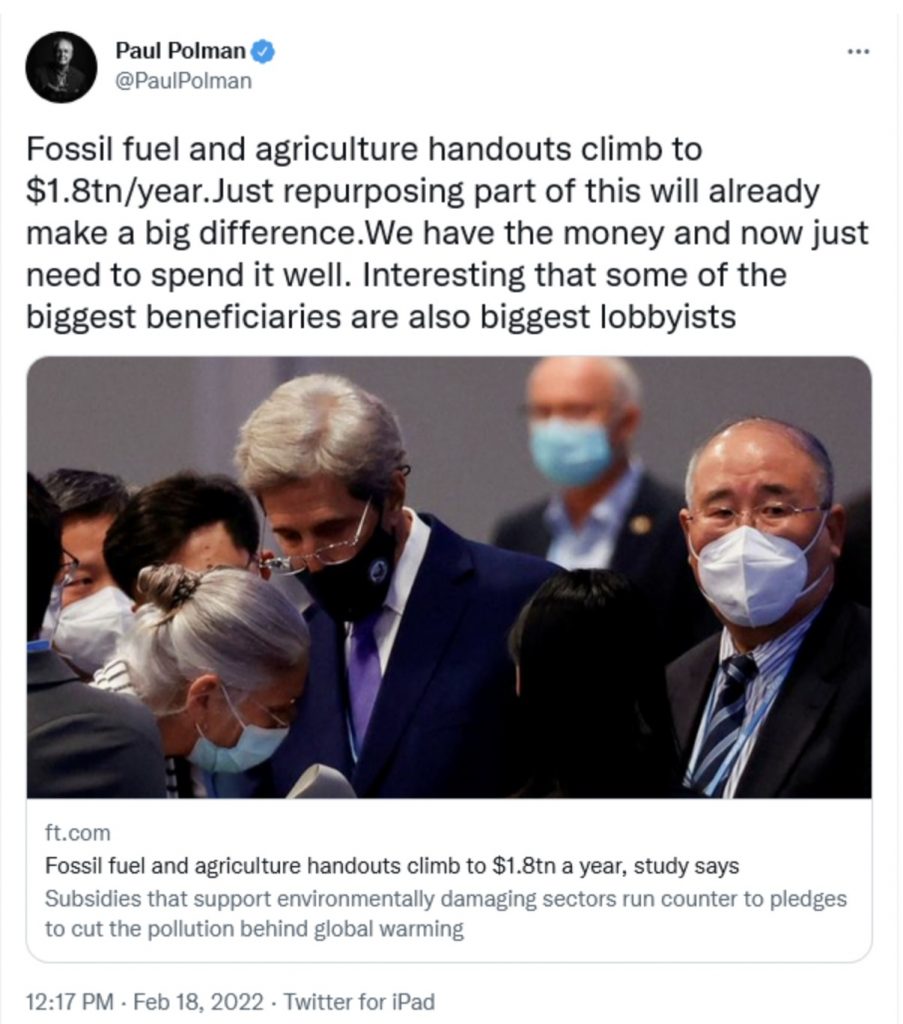 Shipping of Oil and Gas

It’s stunning to learn from legendary climate activist Bill McKibben that 40% of transcontinental shipping is of oil, gas and coal (see in a Blog Post). Wow! Thus, reducing reliance on coal would not only reduce the carbon release of the coal, but it would also reduce the fuel used to power these massive ships. Essentially, each reduction we make will have a compound effect.